Case study in Rethymno, a historical city on the island of Crete

Home/Activities, News/Case study in Rethymno, a historical city on the island of Crete

Case study in Rethymno, a historical city on the island of Crete

The Region of Crete case study in Rethymno

The Region of Crete, for its pilot case study, has chosen the city of Rethymno, a small city belonging to Crete. The Region of Crete has 4 Regional Units, Heraklion, Lasithi, Rethymno, Chania and has about 8.303 km2 of land surface, with beach land 1.046 km, and altitude 2.456 m, like Psiloritis mountains. Creta population after 2011 inventory, is 623.065 citizens, 5,76% of all Greece people.

The city of Rethymno

The prefecture of Rethymno has 85.000 citizens in five municipalities with a lot of traditional villages and excellent countryside:

Rethymno city, is connected with mainland of Prefecture as a tourist, administrative, educational, transportation, commercial and cultural centre, extremely developed in last decades. It’s build by the sea to the north end of the prefecture and has many interesting indications to visit. The most exciting fact is that Rethymno can combine new characteristics of a modern, large city with early times ones of a beautiful old city. Rethymno also has a very big and special beach 12 km long with fine-grained brilliant light brown sand.

Today Rethymno’s economy based especially on tourism and agriculture with olives and grapes. Also Rethymno has a very big university centralized on social, human and philosophical sciences. 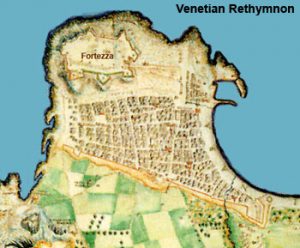 Rethymno is a city with rich culture heritage and a lot of natural beauties with many routes and historical monuments. Historical centre of Rethymno is a regional urban centre, a unique experience with a lot of historical venetian and ottomans style buildings, churches, minares and settlements. Many nations passed from the land trying to occupied it and influence the city: Romans, Venetians, pirates, Egyptians, Turkish, Russians, Germans.

Rethymno declares its existence from the post-Minoan period from the first findings that indicate human presence, with the ancient city of «Rithymna». In Roman period became a common village and during 2nd Byzantine period was a small fortified settlement as «Castell Vecchio». After this time Rethymno sold to Venetians who realised the importance of the city geographically with a very big marine transit area and its port. In 1571, pirates destroyed and burned city completely. Two years later built the castle «Fortezza» for better protection to city from invasions. The history of city goes on when Rethymno was occupied in 1646 by Turkish empire with a lot of revolutions and uprisings, the most famous was in 1866 «arkadi» massacre. Later Rethymno occupied by the Russian army, till 1908 when Crete demanded her unification with Greece and in 1914 was finally satisfied. About 1924 the Turkins Cretans departed and settled in Asia Minor, this fact called as population exchange between Greece and Turkey. At the 2nd World War many buildings were destroyed by bombs and the city like all over the Creta island was very poverty with bad conditions. Rethymno’s old city flourished once again and has kept all the interest from all around the world.

Historical buildings of Rethymno and Adriseismic

Over the decades Creta has gained experience in the prevention of damages due to seismic events which island is vulnerable. The island has many historical centres and structures with high heritage interest.

The old city of Rethymno has a rich cultural heritage, depicted nowadays by culture and architecture. It has been declared as protected historical monument with traditional elements. 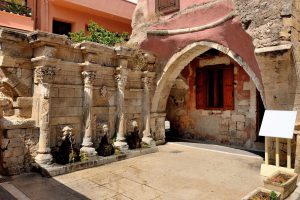 The role of Region of Crete in Adriseismic

All the big cities of Crete as well as smaller cities and villages contain a significant number of historic buildings. Their structural status varies, according to the interventions they have undergone in the past. A few of them that have not undergone any reinforcement interventions, are on the merge of collapse, thus posing a great danger to the citizens.

The role of Region of Crete in Adriseismic project is to contribute to the formation of the methodology, incorporating Crete’s local intervention techniques in historic buildings, as well as seismic vulnerability assessment and construction methods.

The selected case study of Region of Crete will be the historical square located near the «Fortezza» castle. Its formal name is “Iroon Politechniou Square”. I’t’s in the west side of old city centre, with many small cafes meeting points. In this Square, locally known as “Sohora Square” the central building of the Regional Unit of Rethymno is located. It is a a very impressive, historical, neoclassical structure, built from 1840 till 1869. At the beginning it was used as a nation service centre. Then as prince’s George residence and after 1906 as an administration building till today. The view from this old building is quite remarkable; it has very colourful, appeal look and excellent internal architecture. 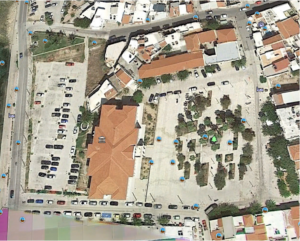 The map of the case study site

Moreover, the Building of the Hellenic Police is also of special interest in the framework of the Adriseismic project. It is partially mansonry and partially of a combination of bricks and RC.

Other newer buildings exist in the Sohora square. They are private residences. Some of them will be incorporated in the Adriseismic project methodology formation 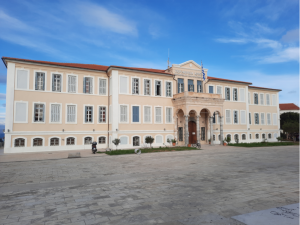 Historic building of the Regional Unit of Rethymno

It’s very important to protect all these impressive buildings, constructed in the previous century. Adriseismic project is the key to improve seismic safety for inhabitants and tourists and adopting relevant tools, techniques and methods, spread the gained knowledge to local communities. 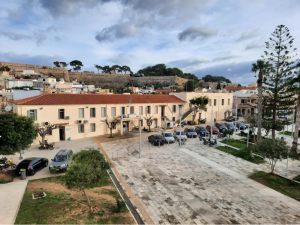