Discovering piazza Puntoni, site for the pilot case of University of Bologna

Home/Activities, News/Discovering piazza Puntoni, site for the pilot case of University of Bologna

Discovering piazza Puntoni, site for the pilot case of University of Bologna

Six are the buildings, around piazza Puntoni, visited and studied by University of Bologna, in order to demonstrate the applicability of effective, quick and low-cost methods to evaluate the vulnerability of existing buildings and aggregates of buildings.

The Buildings of piazza Puntoni

The building was built in 1549 and has been the seat of the university since 1803, during the Napoleonic era. The structure is typical of monumental buildings: thick masonry walls, wide vaults and the classic Bolognese portico on the ground floor. Currently, the part we studied is used mainly for offices and the university library. In the last 40 years no major structural interventions have been carried out, only some minor maintenance work. 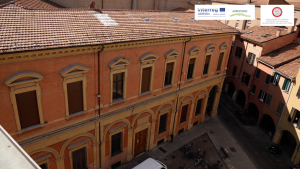 The University student house and canteen

The original project was by Engineer Rinaldi, carried out after the Second World War. The work was then completed by Architect Riguzzi in 1955. It is therefore the most recent building on the square, although it is almost 70 years old.

The structure is in good condition and only small cracks were found on an external elevation, probably due to the construction of the stairwell. In general, good quality materials were found. The reinforcement of beams and columns it is, unfortunately, unknown. 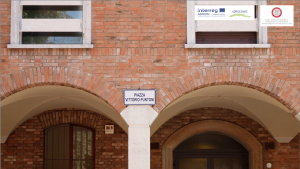 The Department of Economics

The building is located in the neighbourhood of Palazzo Poggi (University Library). It dates back to 1925 and was built to house forensic medicine. The structure, although architecturally classical, has floors made of hollow clay slab and load-bearing masonry walls. It is used as both classroom and office space. Structural work was carried out in the 1980s because of cracks that had formed on the main elevation. 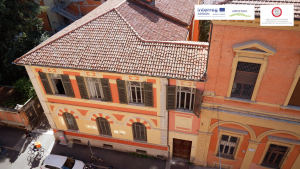 The National Gallery of Bologna was founded in 1808 as a portrait gallery of the Academy of Fine Arts. At that time, it hosted almost a thousand paintings from the suppression of churches and convents after the Napoleonic troops entered Bologna. Throughout the Nineteenth century, halls and paintings increased, following the 1866 suppressions implemented by the new Italian state, but also for donations and acquisitions. The greatest increases in its dimensions took place between 1914 and 1920, with the addition of the Corridor leading to the large octagonal room designed by the architect Edoardo Collamarini, and in the second post-war period, with the construction of the Renaissance Hall.

The National Gallery and the Fine Arts Academy are located in the complex of the Church of St. Ignazio and the Jesuit Novitiate, built by Alfonso Torreggiani in the first half of the XVIII century.

The last adaptation of the exhibition itinerary dates back to 1974. Its heritage includes rich testimonies of Italian painting art from the fourteenth to the eighteenth century. One of the masterpieces is the “Ecstasy of Santa Cecilia” painted for Bologna by Raffaello, but there is also a polyptych by Giotto, works by Parmigianino, by the Carracci, by Guido Reni, three extraordinary altarpieces by Domenichino, and works by Guercino. 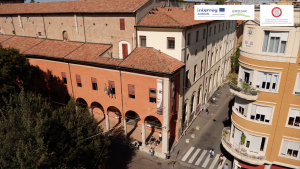 The sundial building was designed in 1934 by the architect Giuseppe Gualandi. It is made with a load-bearing masonry structure, with a particular portico at the ground floor; it has always been intended for commercial activities on the ground floor and large apartments on the upper floors.

The building has the typical appearance of local buildings designed and built in the 1930s, with the use of brick and plastered surfaces imitating stones. It has a portico at the ground floor on the main street and a curved shape of the corner, with large openings. 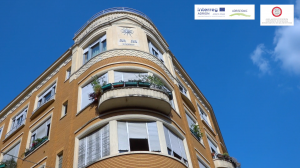 The residential buildings are the evidence of how the area was before the reorganization linked to University buildings. They represent the typical urban fabric of Bologna and the transformations it suffered. Their dating is unknown, but their layout dates back to the XIII – XVI centuries. 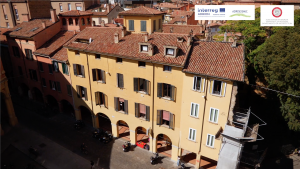